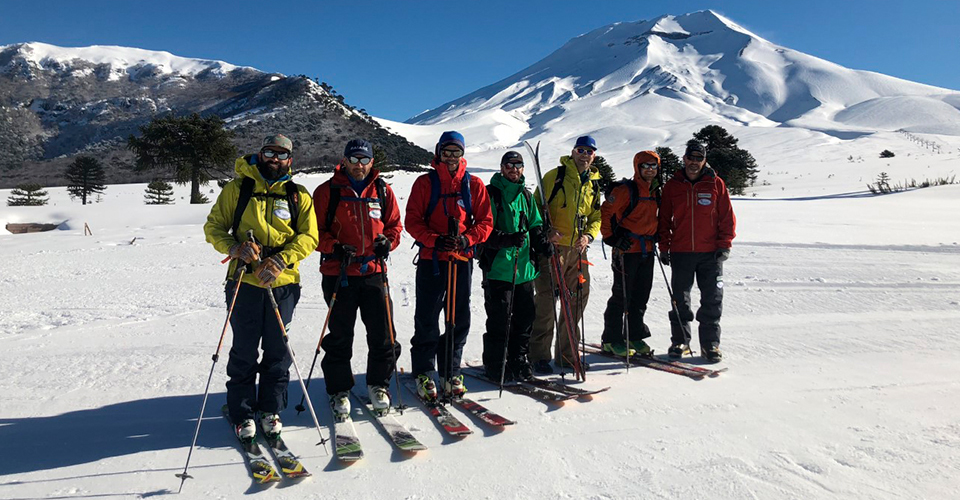 Magellanica Guides® is a specialized adventure travel company whose mission is to take discerning adventurers, to the most spectacular natural and cultural wonders in Argentina and Chile, on Trail, Snow or Water. We create private, custom-made journeys designed around the themes of safety and unprecedented insider’s access.
We are an Argentinean company with an office in Bariloche, Argentina. The company was founded in October 2010 by Diego Allolio. Diego has introduced the American Institute for Avalanche Reasearch and Education, Leave No Trace and American Canoe Association standards in Argentina, available now to other operators and outdoor professionals. Diego Allolio was quoted by Top Travel Specialists such as the Conde Nast Traveler and Outside magazines, the Argentina version of Moon Travel Guides, Backcountry Magazine and Teton Gravity Research.

Diego Allolio wanted to continue to share his passion for adventures in the natural world and in September 25th 2010 founded Magellanica Guides®. Since 1997, he has worked for the National Outdoor Leadership School. In 2000 he co-founded and run Meridies for almost ten years. From 1991 and 1997 he was part of the start up of patagonia® - Outdoor clothing Argentina.
The company launched with long weekend escapes from the US and UK to Bariloche and the Fitz Roy range. Using our teams unique skills credentials, we then expanded our offerings to our core Snow, Trail and Water adventures in Chile and Argentina – the glaciers of Patagonia, the Lakes District in Argentina and Chile; Sea-kayaking the Atlantic Coast and Chilean Fjords; Backcountry Skiing the Andes. Magellanica Guides® has hosted numerous prestigious travelers, and have been regularly asked to coordinate photo shoots and location scoutings.

Diego is responsible for designing and supervising MG programs as well as leading specific trips. In 2011 Diego started the American Institute for Avalanche Research and Education -AIARE- program in South America and Since 2015 he is an AIARE Instructor Trainer. Diego is a PSIA level 2 Telemark Instructor and was instrumental of introducing the standard in SA. In 2009 Diego introduced the American Canoe Association Standard in Argentina and became a certified ACA Coastal Kayaking Level 4 Instructor in 2010. Diego paddled in Tierra del Fuego, Prince William Sound, Baja California, the Chilean fjords, the Pacific and Atlantic coasts, and lakes of Patagonia. As an LNT Master Trainer, in 2003 he run the first Leave No Trace trainings for the Argentine National Park Administration rangers. In addition, he trained the Mexican Biosphere Reserves rangers, Chile’s CONAF rangers and personnel of Chile’s National Environmental Agency (Conama). In 2001 he co-founded/directed Meridies, an expeditions outfitter operating mountaineering, climbing, skiing and kayaking trips in Aconcagua and Patagonia for almost ten years.

Constanza grew up as a ski racer winning many youth races in the Santiago ski resorts. She was also a ski patrol at Valle Nevado, Lo Barrechea, Chile and Sunshine Village, Banff, Canada. It was at these positions where she started to think snow in safety terms fro operations. She is currently taking the AMGA ski guide course and since 2018 she is an American Institute for Avalanche Research and Education instructor. When she isn’t leading a group on skis, she exercising her other passion, Dental Surgeon specialized in rehab. Constanza is a current Emergency Medical Technician -EMT and professional member of the American Avalanche Association.

Juliana became the first Southamerican woman in attaining the IFMGA-UIAGM certification in the region. Native from Ecuador, she is the president of the Ecuatorian Mountain Guides Association. Since 2018 she is an American Institute for Avalanche Research and Education instructor. Juliana has guided extensively in the Cordillera Blanca, Ecuador and Aconcagua for Mountain Madness, another AIARE course provider. She also guided in the Cordillera Blanca, Cordillera Blanca and Patagonia. When she isn’t working she enjoys cooking, running, rock climbing and skiing.

Since 2008, José Luis works in the outdoor education, guiding and mining industries in Patagonia, Central Andes, Rockies and Alaska.
Jose Luis is a Rock climbing and mountaineering National Outdoor Leadership School instructor in Patagonia, Alaska and Wyoming Since 2005 he has worked numerous winters as a certifies ski instructor in Central Andes and Tahoe ski areas. He has guided extensively in Chilean Patagonia and worked for snow safety for the mining industry during the winters in Chile. Since 2015 he is an AIARE instructor and since 2018 he is a Course Leader. Jose Luis is a ACGM guide, ENISHAG and PSIA ski instructor and LNT instructor trainer. When he isn’t working, he is climbing up some hills on his enduro biker craging with friends and wife.

Luciano is a world class alpinist and UIAGM-IFMGA Instructor trainer for the Argentine Mountain Guides Association (AAGM.). Since 2015 he is an AIARE instructor and since 2018 progressed to Course Leader. He has guided extensively in the Southern Patagonian Icefields & Fitz Roy/Torre range, Araucania volcanoes, Frey granite, Central Andes, Cordillera Real, Cordillera Blanca, Huayhuash, Brazil, Alaska & Spain.Luciano has done numerous first ascents in the Fitz Roy-Torre range and was the IFMGA-UIAGM ski program director for Southamerica, training and promoting constant learning fro himself and his peer guides. Luciano is a professional member of the American Avalanche Association. Luciano is a current Wilderness First Responder. When he isn’t working he is climbing and skiing in the mountains around the globe!

Craig is a lead guide for Magellanica Guides® backcountry skiing trips and rock-climbing trips. Craig is a professional UIAGM mountain guide, Physical Education Instructor and current Wilderness First Responder.
Craig had climbed extensively on the finest granite: Yosemite, Bugaboos, Perú, Bolivia, Chamonix and Patagonia completing the most famous lines. Since 2007, Craig has worked for the North Carolina Outward Bound’s Patagonia operation.
Craig has followed his Scottish family tradition in the Saint Andrews school of Buenos Aires, alternating just enough studying and numerous expeditions in which he fell in love with climbing.
Craig has enjoyed learning from different styles at different adventure travel companies in Patagonia, Argentina’s northwest and northeast. He has run several 10km and 21 km marathons, has participated in indoor climbing competitions, has summited Aconcagua and has participated in the 2001 New Zealand Eco Challenge. When he is not working he enjoys leading environmental initiatives in his community and riding his mountain-bike as far as he can go in a day!